The Benefits of Adopting a Large Dog

The Benefits of Adopting a Large Dog

(Why Every kid should grow up with a big dog)

There’s no arguing the fact that the Chihuahua, Tea Cup, Shih Tzu, Jack Russell Terrier, Toy Manchester Terrier, Yorkshire Terrier, Maltese (just to name a few) are cute, cuddly little creatures. And there’s always the notion that carrying your dog around in your pocket or purse is not only an attention-getter, but a great way to make new acquaintances. But, let’s do a comparison of some canine characteristics of various dog breeds.

The American Kennel Club describes these little varmints as bold, feisty, clever, tenacious, persistent and intensely curious, and are not suitable for homes with cats, ferrets or other small pets; some don’t even like children or other dogs. Ideal for apartments and as companions for the elderly, small dogs are cuddly lap dogs, but can be hyper, ill-tempered and have a tendency to bark at the slightest noise.

Most large breed dogs have a tendency to have more patience, and often avoid conflict with other animals. Many small breeds want to show their prowess by barking, jumping, and biting. Large breed dogs know they don’t need to bother. “Nineteenth-century books and periodicals are filled with stories of English Mastiffs who encountered a snarly, yappy little dog with a Napoleon complex, and just nobly ignored the raving little fellow, considering such a lopsided contest to be beneath them,” says Denise Flaim, a dog lover, breeder and the publisher of Little Kids and Their Big Dogs.  That shows the self-control and tolerance often displayed by large breed dogs. The gentle giants will also usually ignore the rough treatment that can be dished out to them by toddlers. It’s as though with great size comes contentment; as though they feel secure in their own presence. They tend to have milder personalities than the little nippers.

Most large breed dogs don’t require as much room or exercise as you would think. Breeds like Great Danes were originally bred as guard dogs, requiring a lot of just sitting around. With a daily walk and some mental stimulation, they are content to crash by the TV with their owners in the evening.

Large dogs are very loyal and protective of their people. The tea cup dog in your pocket will get you noticed, but if you want instant celebrity status, try walking an Irish Wolfhound down the street, or showing up at the dog park with a Great Pyrenees. Large breed dogs are dramatic enough to attract plenty of attention! Adopting a large breed dog grants you admission to an exclusive club: XL dogs and the exceptional people who love them! 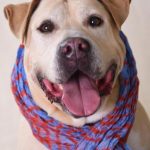 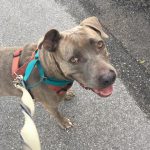 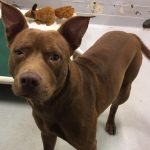 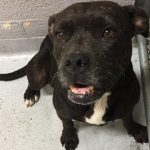 Meet Neo, Raina, Tex and Bessie.  These four large dogs, along with many others, are available for adoption right now at APR.

Neo is a staff and volunteer favorite. Neo was left at our front door one early morning with a note stating his owner could no longer take care of him because he was homeless. Neo is as sweet as they come. He’s a senior boy (nine years old) that loves walks, car rides & playtime. Neo prays that someday someone wonderful will find it in their heart to give Neo a forever home. He loves people of all ages and is a very calm, sweet dog. In other words…Neo is one big hunk of love! No cats please.

Raina (5 years old) was found tied to the bench outside our shelter in the rain (that’s how she got her name) and was in need of medical attention. Raina is now a healthy & beautiful dog. She loves to ride in cars and promises she will never slobber in your vehicle. Raina’s goal in life is to have everyone fall in love with her & rub her tummy, unless of course she’s traveling. Even though she is pretty laid back in her kennel, she is very energetic and loves to run. Raina is a real sweetheart. She is a very loving dog that definitely needs a loving family of her own.

Tex (he’s five and a half) and his best friend Bessie were found by a veterinarian running on Andrews Avenue. Tex was very shy when he came into the shelter but has really come out of his shell, although he is pretty laid back in his run, is very playful and loves to go for walks. Tex is very friendly & sweet. He loves to be pet & will even give you a kiss. Tex really needs a loving home of his own so he can be loved everyday for the rest of his life. We are not sure if Tex is dog or cat friendly.

Bessie was very ill with an enlarged spleen but has fully recovered. Bessie is a sweet girl. She loves to chew bones which are her favorite. She loves to cuddle and snuggle with blankets & loves attention from people of all ages. She is a real sweetheart but is sad without a home of her own. She hopes that someone will come & meet her & take a chance on giving her a forever, loving home. You can see by looking at her that she has not had an ideal life but you would never know it by her nature. Not good with dogs or cats.