Volunteer of the Month Don Anderson

Volunteer of the Month Don Anderson 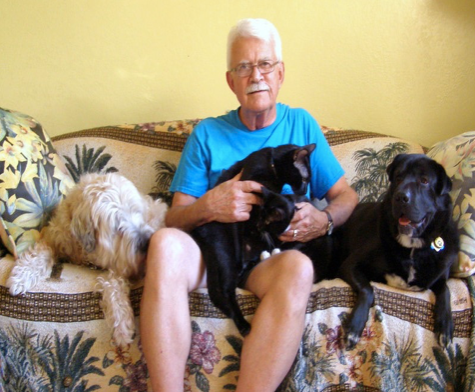 Don is a retired Army man who hails from Massachusetts. We’re grateful that he chose Fort Lauderdale as his place of retirement and Abandoned Pet Rescue as the place to impart his passion for helping animals. He has been opening his heart and home since November, 2012 to both dogs and cats of all ages, fostering them until they are old enough to be moved to our shelter or are adopted.

The “fur kids” in the photo above were “orphans” he fostered and personally adopted from APR, but readily admits that he falls in love with each and every critter that crosses his threshold. In the past that has been as many as fourteen dogs at one time. It would appear that Don’s motto is “cheaper by the baker’s dozen, plus always room for one more.”

If you see Don at the shelter, ask him to show you his “portfolio” of pictures. While most people would bore you to death with shots of their precocious, intellectually superior grandchildren, Don has an iPhone gallery full of his furry charges in every conceivable heartstring-tugging pose imaginable.  When I saw them I caught myself repeatedly saying, “Awe.”  Every one of them was just downright “awe-full.”

The short-eared, droopy-jowled pooch on the right in the above photo is not a pet that was abandoned by an extraterrestrial. Dreyfus is a black lab/sharpei mix, proving that love doesn’t always show up in the form of eye candy; something we should all keep in mind when adopting a pet.

Thank you for what you do, Don. Most of us would be hard-pressed to muster the patience and compassion you so admirably display. You rank at the top of the “soaring high” meter.